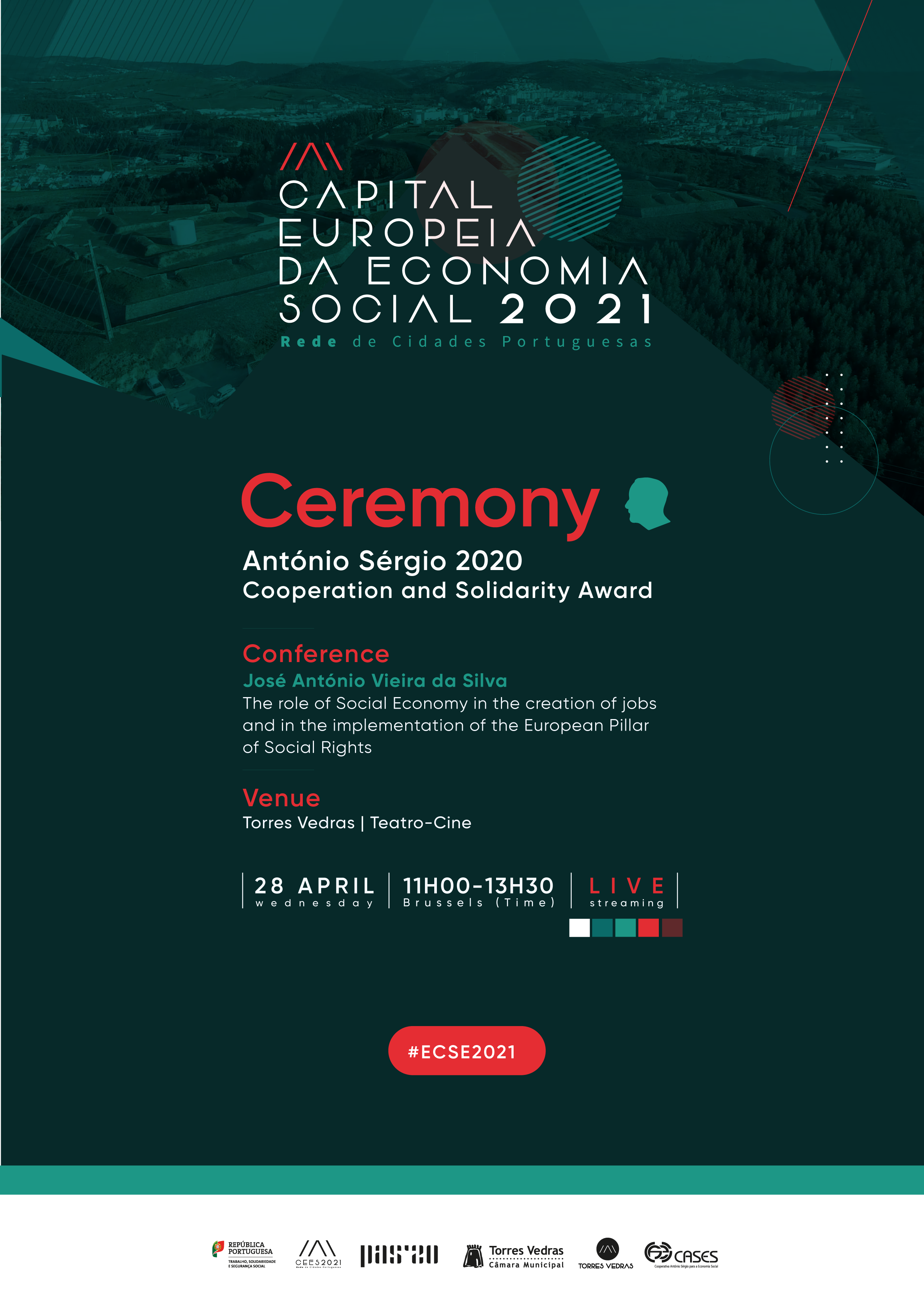 António Sérgio Cooperation and Solidarity Award, created by CASES in 2012, is intended to honour people and organisations who, each year, have most distinguished themselves in the Social Economy sector.

In this edition, the category of Studies and Research in Lusophony debuts, with the Prize being awarded in the following categories:

a) Innovation and Sustainability: aims to reward Social Economy organisations that have distinguished themselves by developing projects with innovative and sustainable approaches and solutions for a socio-economic (or environmental) issue.

b) Studies and Research: aims to reward people and entities that authored studies and research in the field of Social Economy, namely, works on Cooperatives, Mutual Associations, Foundations, Associations, Holy Houses of Mercy and Social Solidarity Institutions (IPSS) or transversal works within the Social Economy sector.

d) School Works: aims to reward works from the school community, at the level of the first, second and third cycles of basic education, secondary, artistic and professional education, both public and private, involving students and teachers in the experience and diffusion of theories and practices of Social Economy.

f) Social Economy Personality Honour Award 2020: aims to distinguish natural persons for their dedication, action and study in the area of Social Economy, namely, for their career in the management of entities and / or study of the sector; promotion of innovative and sustainable actions; creation or reinforcement of interinstitutional dynamics; dissemination and contribution to the public relevance of the theme; capacity for social mobilization and improvement of the sector’s relations with the State. The Honour Award is divided into two subcategories, being awarded to personalities who have distinguished themselves by their career – Honour to Career; and for entrepreneurial capacity – Honour to Entrepreneurial Capacity.

To each of the five categories from a) to e) corresponds a prize of 3000 € and, for the category of School Works, according to the Protocol signed between CASES and the National Council of Financial Supervisors (CNSF), it is attributed to the winner the frequency of financial training modules.

The Social Economy Personality Honour Award 2020 does not have any monetary value, being merely honorary.
Also noteworthy is the partnership with the initiative Portugal Social Innovation, with a specific focus on the category of Innovation and Sustainability.

In 2021, Portugal is responsible for appointing the European Capital of Social Economy, within the scope of the Portuguese Presidency of the Monitoring Committee of the Luxembourg Declaration, which currently comprises 19 EU countries.

After a consultation process, launched by Cooperativa António Sérgio para a Economia Social (CASES), by delegation of the Minister of Labour, Solidarity and Social Security, the model chosen is that of a network of cities formed by Braga, Cascais, Coimbra, Sintra and Torres Vedras.

This network assumes, in 2021, the status of European Capital of the Social Economy, developing a program of its own initiatives, or in partnership with CASES, with a view to its expansion and progressive structuring in the future.

Thus, the City Councils of Braga, Cascais, Coimbra, Sintra, Torres Vedras, and also CASES, formalized the Network of Portuguese Cities – European Capital of Social Economy 2021, by signing a Letter of Commitment by their Presidents.

This formalization took place on March 29, at 11.00 am, at the Conference “The role of the Social Economy in job creation and in the implementation of the European Pillar of Social Rights” within the scope of the PPUE – at the National Palace of Queluz, Sintra.